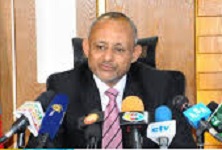 The Government of Ethiopia has increased its annual tax revenue for the budget year concluded July 7, 2020 by 18 percent (almost one billion dollar) compared to the previous year.

The annual revenue the country has collected is has increased by 35.4 billion birr (about one billion dollar), according to Minister of Revenue of Ethiopia La’qe Ayalew, who briefed reporters this afternoon. During the concluded budget year, the country has collected a total of 233.7 billion birr (close to $6.57 billion at the current exchange rate). The Ministry has achieved 86.5 percent of its target for the year.

The Minister stated that modernization of the tax system including introduction of e-filling and e-taxing have helped the Ministry to boost the tax earnings of the country. He also indicated that the law enforcement measures taken against those engaged in illegal and contraband trading has also helped the country to collect more revenue this year.