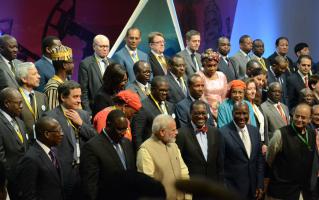 The 52nd African Development Bank (AfDB) annual meetings open today in Ahmedabad, India, calling on the need for increased investment in the development of African continent and its people.

“Africa’s greater future is for all,” said AfDB’s President Akinwumi Adesina, in his opening remark. He stressed the need to invest in the development of Africa today, which will have a considerable market potential and share globally tomorrow.

In his view partnering to develop Africa today is like building the future market of the continent, such as benefiting from its peoples’ consumer spending that is estimated to reach $1.4 trillion in the coming three years.

He further stated that AfDB is about to launch African investment forum soon in order to attract pension, sovereign wealth and insurance funds, towards the development of the continent. He also noted that his Bank will continue aggressively investing in the bright future of Africa including $12 billion on its light up and power Africa program in the coming five years.

He also mentioned that his bank has also allocated $24 billion in the coming ten years for the development of the continent’s agriculture, which among others is key for ending or cutting food import bill while at the same time creating jobs and improving lives of the people in the rural areas.

In the coming five years AfDB is also planning to create 50 million jobs for the fast growing number of African youth.

Reports show that the number of youth in Africa is growing rapidly. In 2015, 226 million youth aged 15-24 lived in Africa, accounting for 19 per cent of the global youth population. According to the United Nations Populations Division’s report by 2030, it is projected that the number of youth in Africa will have increased by 42%. Africa’s youth population is expected to continue to grow throughout the remainder of the 21st century, more than doubling from current levels by 2055.

Only one out of six young in Africa is employed, according to Adesina who hopes that investing on these youth future means stopping the dying of Africans in the Mediterranean Sea who migrate at any cost in search of better life and job.

In his remark, the host nation of AfDB’s annual meetings, Prime Minister Narendra Damodardas Modi expressed his country’s commitment to continue working with Africa sharing lessons of development to each other. “India has had strong ties with Africa from centuries,” the premier said.

“Many of the challenges we face are the same [with African people]: uplifting our farmers and the poor, empowering women and ensuring our rural communities have access to finance and building infrastructure. India will stand with you shoulder to shoulder for better future for all of us,” he said.

The 52nd AfDB annual meetings is expected to be concluded on Friday.