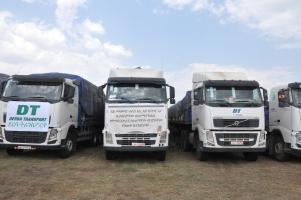 The handing over of 55 heavy trucks of white maize and 20 heavy trucks of animal forage donated by Sheikh Mohammed Hussein Ali Al-Amoudi , Owner and Chairman of MIDROC Ethiopia, and his family to support drought affected citizens in three zones of  the  Oromia Regional State – Guji, Western Guji and Borena – held Tuesday – April 18, 2017.

The handing over held in Negele Borena town was attended by officials of the Regional State as well as from MIDROC Ethiopia, Traditional Chiefs and members of the local community.

During the handing over ceremony representative of Sheikh Mohammed, Esayas Kebede, indicated that the donation is part of the Ethiopians-for-Ethiopians effort to support drought affected citizens.

He also said that the transportation cost of 20,000 quintals of white maize and the 10,000 Belt (over 150,000 kg) ALFALFA animal forage was also fully covered by the Sheikh by deploying his own heavy trucks.

The representative also recalled that apart from hugely participating in investment activities and playing his own significant role in the country’s national income generation in terms of taxation and foreign currency earnings, Sheikh Mohammed has been making similar donations of grains from his agricultural firms during the previously occurred droughts in Ethiopia.

Head of Guji Zone Political Affairs Office Ato Tilahun Fikadu on his part pointed out that the volume of the donation made by Sheikh Mohammed H. Ali Al-Amoudi is the largest provided so far for the zone and indicated that various segments of the society are also doing their best to assist in the same effort.

Oromia Pastoralists Affairs Bureau Communication Head Ato Nasir Mohammed and the traditional chief also indicated that the donation made by Sheikh Mohammed is substantial and extended their appreciations to the Sheikh and his family.

In addition to providing emergency food donation, Sheikh Mohammed’s agricultural firms are relentlessly working to support local communities to ensure sustainable and modern agriculture and they are serving as centers of excellence for research and technology dissemination.

It is to be recalled that recently Sheikh Mohammed also made animal forage donation to farmers in the Guji Zone and a Birr 40 million cash donation to support victims of the Repi landslide tragedy occurred in Addis Ababa.