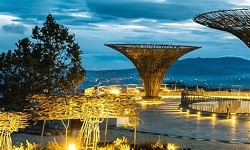 The next in the monthly series of monthly run at Entoto Natural Park takes place on Saturday 7th August in Addis Ababa, Ethiopia when the August edition hits the tarmac for the event’s 6th edition.

The event which has become hugely popular among its participants and for which registration is now managed completely online is expecting a participation of more than 250 runners on the traffic-free course within the park which was opened last year. In the race’s first edition in March just 125 runners took part; last month that figure had climbed to 280.

Participants who win the race three times are crowned as “Predator”. It is possible that this weekend will see the crowning of two such predators.

One of the two-time winners Raiye Aman is a student who loves the event: “I used to have a health problem and this is why I started running with my father. Now I am healthy and love running. I even want to be a successful athlete in the future.”

Two-time male champion Habtamu Abera is a barber and says about the event: “I used to do Taekwondo before but during the pandemic I started running on my own as all gyms were closed. I then competed for the first time at Entoto and won twice. Now I train every other day.”