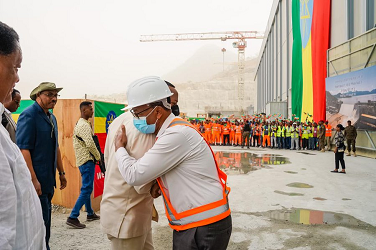 “Today Africa’s biggest power generation Renaissance dam has commenced power generation,” Prime Minister Abiy Ahmed twitted this morning in Amharic language. “This is a good news for our continent and those downstream countries with whom we would like to work and benefit mutually,” he twitted.

GERD has been disputed by the down stream countries mainly Egypt and Sudan, which have been claiming that it will reduce the volume of water they used to get from the Nile River. Meanwhile, the Government of Ethiopia has been arguing that as it contributes 86 percent of the waiter to the Nile River, it is not fair to leave all the water of Abay River and its streams flow into Sudan and Egypt while over 60 million Ethiopians live in the darkness.

With the aim of making sure fair and equitable utilization of the water among the Nile Riparian countries without causing major harm to the downstream countries, the Government of Ethiopia has launched the construction of Africa’s biggest hydropower dam- GERD which can generate from 5,000 to 6,000 megawatts of electricity.

#GERD total generation capacity of 5,150MW & annual energy of 15.76TWH will be the largest hydroelectric power in #Africa. It is built by direct contribution & purchase of bond by citizens of #Ethiopia and government budget. Thank you All who supported us


Ethiopia has also announced that it will not use any donation or foreign loan to complete its national pride project – GERD, which was initially estimated to cost $5 billion. During the first phase GERD, which is completed about 90 percent, will generate 375 megawatts of electricity from one turbine. During the inauguration it is indicated that in the coming months a few more turbines are expected to also generate additional electric power.

It is expected that in the coming few years, GERD will commence to generate electricity with full capacity and light millions of houses in Ethiopia, as well as generate hard currencies for the country, which aims to export energy to the neighboring countries mainly Kenya, Sudan and Djibouti, among others.

Today, Africa’s largest power plant, the GERD’s first turbine began generating power. This is a good news for our continent & the downstream countries with whom we aspire to work together. As Ethiopia marks the birth of a new era, I congratulate all Ethiopians! pic.twitter.com/KoMEgIcGVk 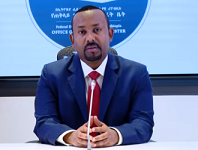