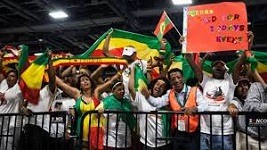 The Ethiopian diaspora has donated more than one billion Birr to the construction of the Grand Ethiopian Renaissance Dam (GERD), the prevention of Covid-19, various charities, the Ethiopian National Defense Forces, humanitarian aid and rehabilitation and to other national projects.

In connection with the activities to further the Diaspora contribution, the Ethiopian Diaspora Agency has evaluated its achievements and deliberates on its 2021/22 budget year. The Agency has presented details of the activities carried out during the last fiscal year.

In addition, the remittance income gained from the Diaspora is worth three billion dollars and the implementation of 83 projects with a capital of 3.9 billion birr has created 13,000 jobs, and the public diplomacy in collaboration with the Diaspora has also served the interests of Ethiopia.

Dr. Mohamed Indris, Deputy Director General of the Agency, in his message while concluding the forum, said that the performance of the budget year has been high and the results indicate that success is inevitable as long as efforts are made in collaborations in and in the overseas. He added that if the gaps in the plan are filled, the agency’s performance can be further enhanced.

In addition, the Ethiopian and Ethiopian-born investors and scholars in Frankfurt, Germany, have purchased a 16,000-euro bond through a fundraising event organized by the FDRE Consulate General in Frankfurt for the construction of the Grand Ethiopian Renaissance Dam.

In addition to the bond purchase, some 14,500 has been provided to help rehabilitate people affected by insecurity in North Shoa.

In a message delivered on the occasion, Fekadu Beyene, Consul General of the Federal Democratic Republic of Ethiopia (FDRE) in Frankfurt, expressed his appreciation to Ethiopians and Ethiopians descent for accepting the invitation and supporting their beloved country. He called on investors in the Frankfurt area to support their country in all fields, and called on them to continue their support.

The Diaspora members for their side added that Ethiopians living in the area should support their country in all fields.

According to information obtained from the FDRE Consulate General in Frankfurt, they were asked to demonstrate their patriotism as well in the years to come.

In the same line, the Ethiopians living in Manitoba, Canada have raised more than 106,000 Canadian dollars for the construction of the Grand Ethiopian Renaissance Dam.

More than 106,000 Canadian dollars was raised for the construction of the Grand Ethiopian Renaissance Dam in collaboration with the Ethiopian Embassy in Winnipeg and Brandon.

The program was launched with the blessing of various religious leaders, and the clerics urged Ethiopians to stand together at this crucial time and continue their support for the successful completion of the second filling of the Grand Ethiopian Renaissance Dam.

In his opening remarks, Ambassador Extraordinary and Plenipotentiary of Ethiopia to Canada, Ambassador Nasise Chali, said he is proud of the ongoing fundraising activities of Ethiopians and Ethiopian descent for the construction of the Grand Ethiopian Renaissance Dam. He said more than 376,000 Canadian dollars has been raised so far in 15 forums in collaboration with the Diaspora Agency and the GERD construction coordinating committees.

Ambassador Nasise expressed the hope that Ethiopians living in Canada will be a great example of their love and generosity for their country. “You are urged to continue contributions in any form.”

According to the organizers of the program, the completion of the Grand Ethiopian Renaissance Dam has an important role in terms of electricity, water management and will bring more than half of the country’s mothers, children and youth out of the darkness. To this end, he expressed his motherly plea that the completion of the dam should be realized sooner so that Ethiopian mother’s get access to power and energy supply.

The Manitoba Coalition, the organizer of the program, has provided inspiring and motivational poems to the leaders, members and participants.

According to information received from the mission, the participants promised to continue their support in any form of contribution and bond purchases.