He made the remark during a speech to officially open the Sixth Meeting of the Statistical Commission for Africa (StatCom-Africa-VI). The President said quality statistical information was crucial, not only to provide the evidential basis for design and implementation of policies at national, regional, continental and international levels, but also to monitor and evaluate their impacts on economic growth and social improvements.

“The data revolution promotes embracing technology and innovation at all levels of statistical processes such as collection, processing, analysis and dissemination,” he said.

National statistical systems are the main sources of such data, the President said, adding as a result they face an urgent need to reposition, adapt and strengthen their statistical production processes in order to meet widening, increasing and evolving needs of data users.

The four-day meeting is being held under the theme; Enhancing the capacity of the National Statistical Systems to support policies for Africa’s economic diversification and industrialization.

Since most SDGs require geospatial data, the President said it imperative for the continent to focus on ‘the use of technology in this new era of the data revolution to incorporate a geospatial data revolution in Africa’.
He shared with delegates Ethiopia’s plans to conduct its 4th Population and Housing Census this year. This will be the country’s first ever fully digital census.

He said technology and lack of funding could hamper such aspirations but added that such disruptors were not permanent though they may have long lasting effects.

“It’s only when we work together that victory would be certain,” said Mr. Maluleke, who also spoke the need to harmonize statistics on the continent and related issues.

“We have to understand the sense of urgency. Having reliable, accurate and accessible data will help us meet the 2030 Agenda for sustainable development,” he said, adding political leadership was crucial in the whole process.

Mr. Schweinfest said his office was working closely with the Economic Commission for Africa (ECA) and the African Development Bank (AfDB) to support member States in the 2020 round of population and housing census and to strengthen national statistical systems for the SDGs.

AfDB’s Statistics Director, Charles Leyeka Lufumpa, said working together as the African statistical community, they should be able to meet the ever-increasing demand for data needed to track progress on the SDGs, and Africa’s 50-year development plan, Agenda 2063.

He emphasized the need for greater focus to be put on economic statistics, adding lack of political will by some member States to allocate adequate resources towards regular censuses and surveys posed risks for diminishing the reliability of national accounts data over time.

“In this regard, our new efforts are geared towards enhancing advocacy about the importance and use of statistics, targeting mostly key policy makers. We believe that this will encourage governments to invest more in statistical development,” said Mr. Lufumpa.

He said the 2030 sustainable development agenda’s call to leave no-one behind requires national statistical systems to invest in civil registration systems and to provide disaggregated national indicators for monitoring and redressing inequalities as a matter of human rights.

“We will do all it takes to continue our support for building the requisite capacity in our countries to generate timely and reliable data to inform Africa’s development process,” Mr. Lufumpa added.

The 13th Session of the African Symposium on Statistical Development (ASSD-XIII), also opened Monday under the theme: Strengthening population censuses and national accounts to support the realization of Agenda 2030 for sustainable development and Agenda 2063 – the Africa we want.

Ethiopia PM calls on Diaspora to set up trust fund 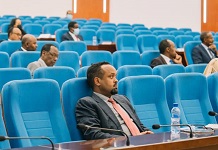