The Dire Dawa with Dewale toll road, which has been partly operational early this year, is expected to facilitate the export import trade of Ethiopia, which depends on Port of Djibouti for over 90 percent of its import – export trade. The new road reduces driving time between the two towns to four hours from one day. Previously on gravel road truck drivers used to spend up to one day to reach Dire Dawa from Dewale or vice versa.

To use the road heavy truck drivers are supposed to pay 200 birr (around $7), while medium size trucks such as Isuzu fsr and automobile drivers will pay 150 birr and 100 birr, respectively. The new road built with a total government investment of 5.2 billion birr (about 180.5 million), is part of the express road linking Djibouti with Addis Ababa. The new express road is the second segment to be completed after the Addis Ababa – Adama Express road.

It is recalled that Ethiopia and Djibouti have already connected with electric railway since last year though it is not operating at its full capacity. Djibouti and Ethiopia were connected for over a century by railway – Chemin de Fer Djibouto-Éthiopien, which was opened by Ethiopia’s Emperor Menelik II in 1901. 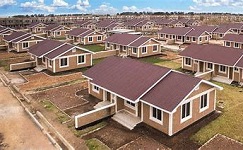