South Korea, which aims to become a hub for ICT startups in Asia as well as on the world stage, has embarked on a mission to find global talent for Korean startups.

The K-ICT Born2Global Centre (Born2Global), a major Korean government agency under the Ministry of Science, ICT and Future Planning (MSIP), announced its plan to diversify Korea’s startup scene by attracting talented workers from around the world and create an environment that enables Born-Global startups to grow based on strong foundations overseas.

Attracting workers from all around the world

The world’s top startup ecosystems, including the U.S., UK, and Singapore, have already begun attracting workers not only domestically but globally as well, creating a firm foundation upon which startups may grow into global enterprises based on the strength of their culturally diverse workforces.

According to Compass’ 2015 Global Startup Ecosystem Ranking, 45 percent and 34 percent of startups based in Silicon Valley and New York, respectively, are staffed with foreign workers, while more than half of all startups in London (53 percent) and Singapore (52 percent) are comprised of foreign employees. This inflow of highly skilled personnel from around the world, who possess a deep cultural understanding of the global market, is helping startups expand their businesses into overseas markets.

Providing visa and labor services for foreigners working in Korea

Born2Global provides visa and international labor consulting services for startups that employ or plan to hire foreign workers as well as for foreigners newly hired by Korean startup companies.

The E-7 visa is issued to professional foreigners, or those seeking to invite professional foreigners, who wish to work in sectors specially designated by the Minister of Justice under contract with a public or private company in Korea. The Letter of Recommendation for Special Foreign Workers is a document issued by the government to companies that wish to employ foreigner workers; it supports the issuance of E-7 visas for such companies, offering benefits in terms of the entry and departure of foreign workers wishing to work in Korea.

As part of  Born2Global’s labor consulting service, a certified labor attorney provides consultations to foreign workers regarding labor-related issues in a wide range of areas, including recruitment, wages, personnel management, labor disputes, and retirement. In particular, the attorney will offer consultations on and assist in the process of drawing up employment contracts and establishing wage systems, allowing foreign workers to work in a safe and fair environment until their retirement.

These visa and international labor consulting services will be available in Korea and overseas to all those seeking employment with or who have been newly hired by startups in Korea.

Thanks to the South Korean government’s active promotion of creative economy policies, the institutional conditions for startups and startup-related innovation have been improving, along with the quality of the startup ecosystem.

Starting in 2013 with a comprehensive global expansion platform, Born2Global has been supporting promising startups and venture companies in their efforts to enter the global market in the early stages of their businesses in a number of ways, including offering consulting and training services and matching businesses with investors.

From September 2013 to November 2016, a total of 5,721 consulting sessions were provided, resulting in the filing of 428 patent applications overseas, signing of 230 business or partnership contracts with foreign companies, and establishment of 27 corporations overseas. Also, a total of USD 183 million was invested, directly and indirectly, startups in Korea. 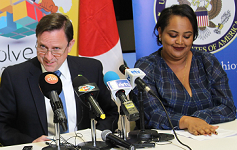